The City of Richland has a Mayor/Board of Aldermen form of government with a mayor and five aldermen all elected at-large. This assures widespread representation of all the city’s citizens in municipal decision-making. Thoughtful stewardship and careful planning have enabled the city to keep pace with the commercial, industrial, and residential growth the area has experienced in recent years.

The Mayor and Board of Aldermen meet twice a month on first and third Tuesdays at 6:00 p.m. and welcome public attendance. City offices, located in the City Hall at 380 Scarbrough Street, are open from 8:00 a.m. to 5:00 p.m. on weekdays.

Conveniently located in Rankin County just across the Pearl River from Mississippi’s Capital City of Jackson, Richland is strategically bisected by U.S. Highway 49 South. Minutes from the Jackson International Airport and bordering on the intersection of Interstate Highways 55 North-South and 20 East-West, Richland is the hub of a thriving transportation, warehousing, and distribution industry.

Richland is a forward thinking community, rich with loving citizens, filled with pride and American Patriotism, dedicated to peace among all people and devoted to God and Country.

Elements of the Richland Flag

The DOVE represents Peace, Love and Harmony among our citizens. The colors RED, WHITE AND BLUE symbolize our American Patriotism. The five RED STRIPES represent the five Aldermen in Richland. The STAR stands for a City guided by its Mayor and Aldermen, striving for a brighter future. “R” stands for Richland and its strong religious faith. 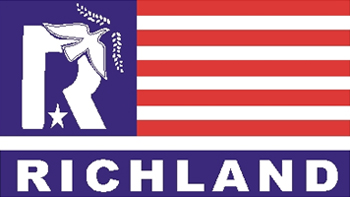 The original sketch for the City of Richland flag was done by John L. Morris on February 21, 1991.

PLEASE REMEMBER: Parking on the roads of Richland is illegal and your vehicle is subject to be towed per Richland Ordinance 1978-9 Section 9-1.